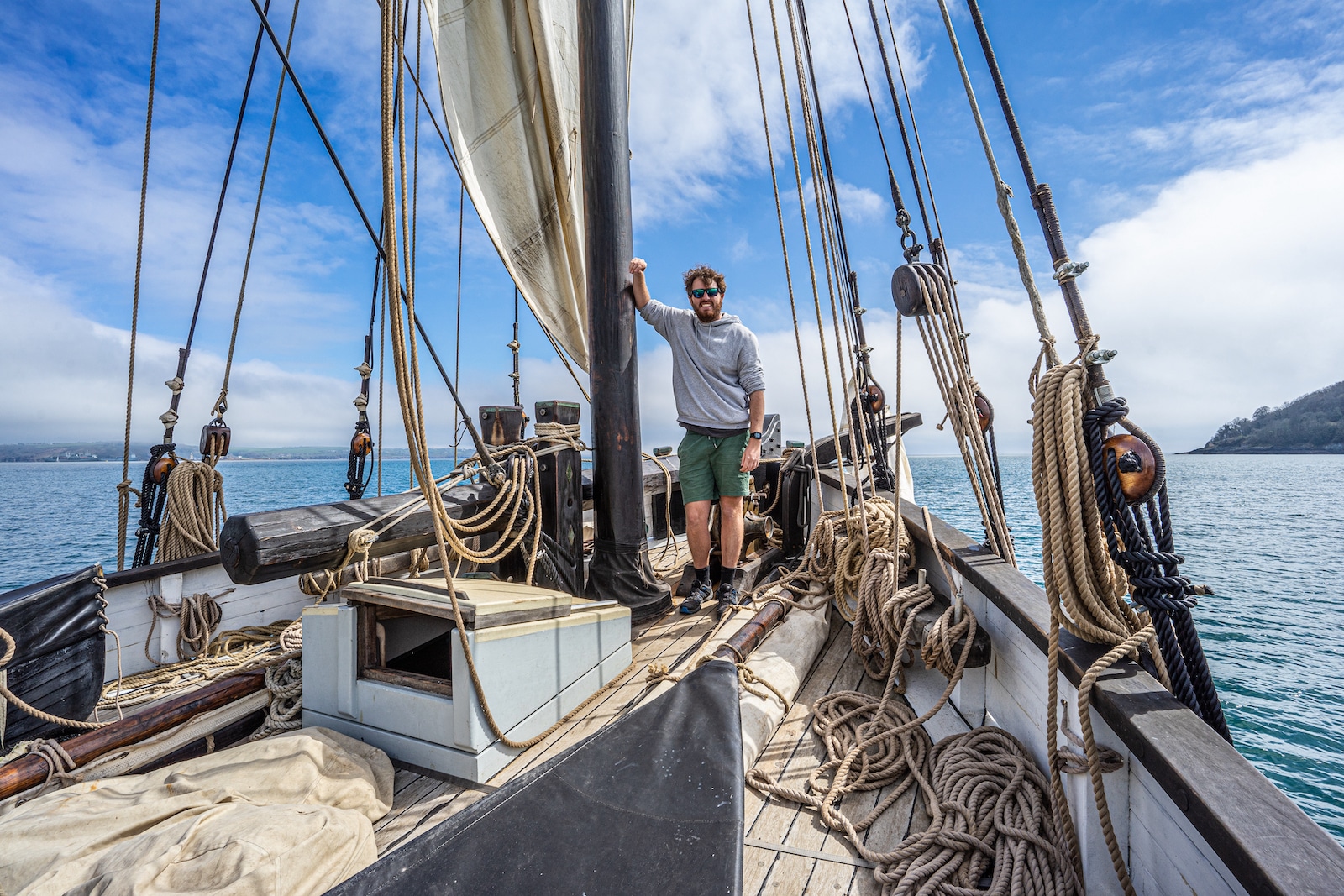 Richard Collett, travel journalist, recently joined Cornish lugger Grayhound as she sailed from Plymouth to Falmouth and back again, following in the wake of sailors and smugglers from days gone by. First-time sailor Richard eagerly climbed aboard, keen to embrace the experience, learn to hoist the sails, tie ropes and fall in love with life on the waves.

Grayhound is a newly built Cornish lugger who launched in 2012 but don’t let her modernity fool you. She is an exact replica of the original ‘Grayhound’ who was built in Cornwall in 1776 having been commissioned for the collector of customs, Mr John Knill, in St Ives. Designed for speed, she subsequently spent her first few years working as a revenues lugger, patrolling and chasing smugglers who, when caught, had their goods impounded as well as their vessel. The latter was then later sold at auction, whilst the smugglers fate lay in the hands of the law.

Smuggling was rife in the southwest during this time period and ironically, the vessel of choice for many smugglers was a Cornish lugger as their speed was unrivalled. In fact, these vessels became so difficult to chase down that the government eventually banned three-masted luggers in an attempt to stymie the smuggling trade!

On winding down her career as a revenues lugger, from 1780 Grayhound served as a privateer – a privately owned armed vessel granted a warrant by the government to wage war on enemy ships. With conflict arising due to the Declaration of Independence by the North American Colonists in 1776, privateering in the English Channel and beyond became common place and Grayhound, being a well armed and fast ship became a successful privateer vessel. Her final fate is unknown but it is assumed she was sunk in battle, if so, we imagine it was a glorious one!

Back to modern day and on joining Grayhound in Plymouth, Richard explains “I didn’t know my fore from my aft, but as we raised the sails and set out across Plymouth Sound I was keen to learn the ropes.” Richard soon familiarised himself with the slower pace of life that is synonymous with tall ship sailing, unwinding and observing as the gorgeous coastline unfolded and an anchorage was chosen for the night. Read more about Richard’s sailing holiday on Grayhound in his article on Travel Tramp or experience it for yourself with a 2022 tall ship adventure!

Why not get a taste of life on board this lovely Cornish lugger yourself? She has a few berths remaining for the 2022 season, from Scilly to Brittany or sailing around the Devon and Cornish coasts, there’s something for everyone. View Grayhound’s 2022 Schedule >