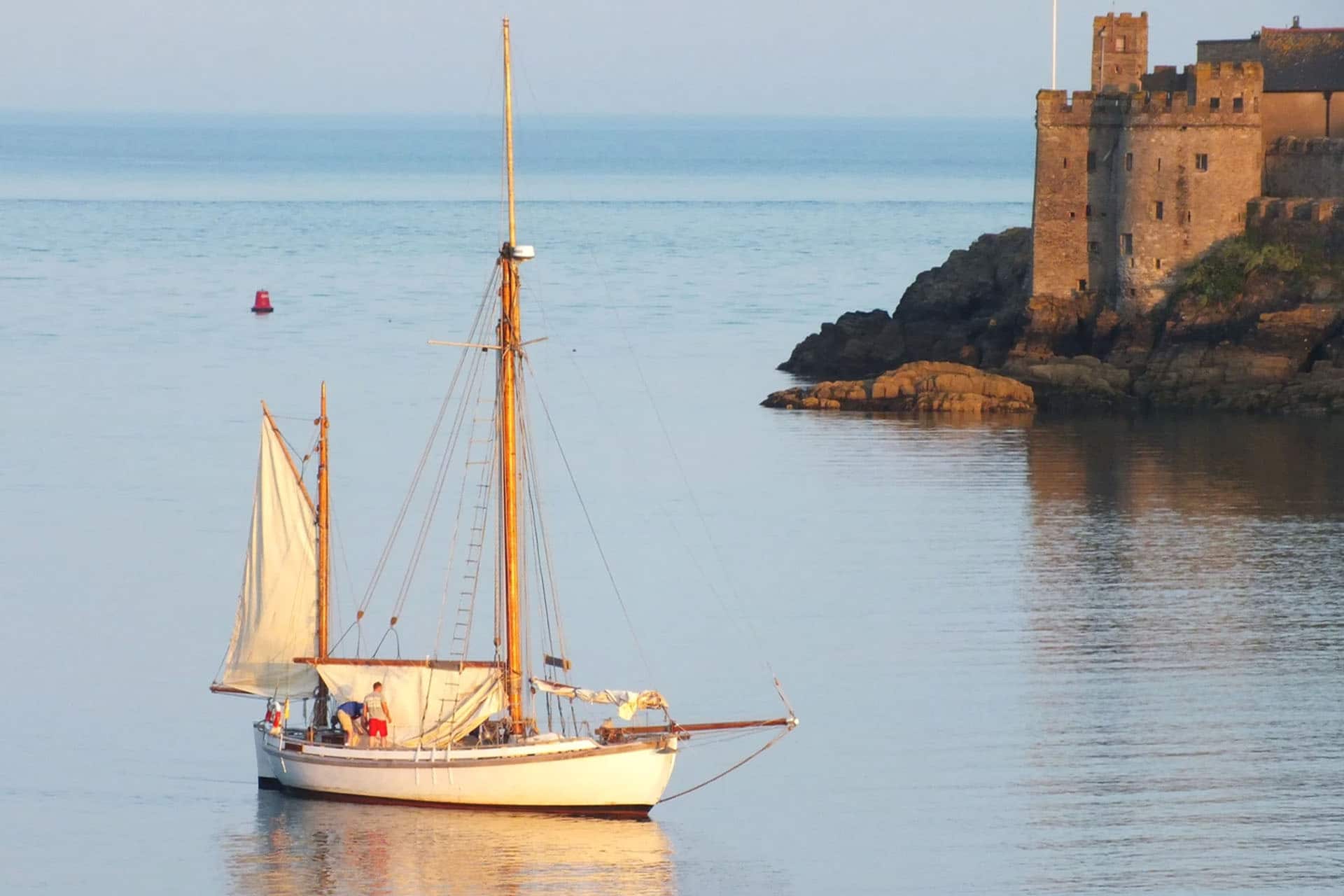 Naomi from the VentureSail booking team discovers the delights of sailing in Devon .

Growing up in Cornwall I thought coastlines couldn’t get any better. I’ve travelled a lot internationally and always came home to the Cornish Coast with a sigh of relief. Then I went sailing along the Devon coast and realised, perhaps, just quite how bias I had been! I am not saying they are “better” (loyally Cornish!) but I would say a happy extension of the Cornish coastline and more dramatic. Higher cliff lines loom, with a lot more greenery, gently giving way to quaint inlets and harbour towns, with crystal blue waters – almost like the Scillies. There are many more coastal features here than in Cornwall with arches and stacks forming fascinating headlands.

Brixham itself is such a dear little harbour town. With its colourful houses and quaint cottages, it’s definitely a scene for a postcard! I had a wander here before I boarded and all the locals are really friendly. There is a sense of “lost-in-time’ here, a relaxed atmosphere that seems to be getting lost in this increasingly modern world.

Sailing alongside Berry Head near Brixham sees a dramatic limestone headland which has been designated as an Area of Outstanding Natural beauty. With my binoculars at the ready, I couldn’t believe the birdlife that called these sheer cliffs home! Colonies of kittiwakes are something I’d been dying to see and I was certainly not disappointed. I had read that the Lighthouse on Berry Head was on one of the highest points on the British Isles; I was not prepared for the size and scale of this cliff line – totally breathtaking.

Sailing into Dartmouth and Kingsbridge you are greeted with the silhouettes of their Castles marking each side of the river mouth. Totally picturesque on both sides of the river, each town spills down onto the waterfront, dotted with colourful houses. We stopped in Dartmouth for the night and what a lovely town it is. We walked through with the skipper and had a drink at the yacht club, before going onto have a cream tea in a 16th-century building now cafe – The Sloping Deck.

Next we were headed for Salcombe. Dolphins swam with us for a good hour or so as we continued our sailing down the coast and we were lucky with good weather so it made for perfect sailing! Arriving into Salcombe was really stunning. The town is tucked in and around the inlet, with local fishing boats lining the shore. This little inlet was a paradise for “life on the water” from SUP’s to children practising in dingy, kayaking to classic boats.
Everyone’s waves and sails by beaming from ear to ear – a really great atmosphere. We stayed here for another night before heading back up the coast the next day. There wasn’t as much wind on this day but it made for the perfect opportunity to learn how to read charts and plot positions. Andy the Skipper is a great guide who has a lot of experience!

With a tiny taste of what the Devon coast has to offer from the sea, I will be sure to return for a longer sailing passage with hope to stop at more the . My trip was aboard Escape, but Our Daddy and Pilgrim of Brixham also sail around these waters.

Take a look at our breaks in Devon >