Eye of the Wind’s History

Built in 1911 as a topsail schooner, the ship now known as the "Eye of the Wind", was once named "Friedrich", built by C Lühring of Brake, West Germany.

The Eye of the Wind was originally intended to work in the South American hide trade when she was built in 1911. 12 years later, in 1923, her name was changed to “Merry” after being sold to a Swedish buyer, and for the next 50 years the ship carried general cargo throughout the Baltic and North Seas, and during the summer she was used as a fishing boat, off the coast of Iceland. 1926 saw the Eye of the Wind have her first engine installed, and in the following years under Swedish ownership, various alterations were made to transform her into more of a ketch.

In 1969 the ship was almost destroyed when a fire broke out in the engine room, and it became unlikely that she would ever sail again, however at around this time, a group of classic ship enthusiasts trying to find a traditional hull for rebuilding, and in 1973 they bought what was left of the Eye of the Wind and began restoration work.

The parts destroyed in the fire had to be completely rebuilt and replaced, and the older metals that had been warped by the fire was replaced with stronger, more sturdy metal, and more modern navigation and electrical systems were fitted. The ship was then brought to England for further reconstruction, where she began to evolve into a brigantine, with new accommodation built below deck, mostly made out of recycled materials – the deck once used to be a dance floor!

It was in England that the ship’s name was eventually changed to the Eye of the Wind, and the owners decided that the first voyage of the ship would be a circumnavigation of the globe, which was completed in 1978, ending in Plymouth, England. After this, Eye of the Wind became the flagship of a two year scientific expedition, before appearing in several feature films. More recently she has appeared in an Australian film Desperate Fortune, which told the story of the great British navigator Matthew Flinders. In early 1990, Eye of the Wind sailed the Southern Ocean, participating in the celebration of 200 years of settlement on Pitcairn Island by the descendants of the HMS Bounty mutineers.

On October 7, 1991, the Eye of the Wind began her biggest adventure, and sailed eastward across the Great Southern Ocean, heading for Cape Horn. At 09.43 on December 10, 1991, the ship rounded Cape Horn, and sailed northward to Lisbon to join the Columbus Grand Regatta. In company with the largest fleet of Tall Ships this century, she sailed to the Americas and back to England, culminating in a grand 11-month voyage. 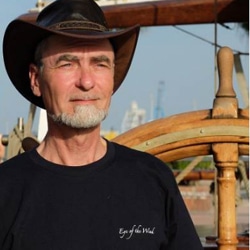 The Eye of the Wind has 2 skippers, and they change roughly every 3 months or so. 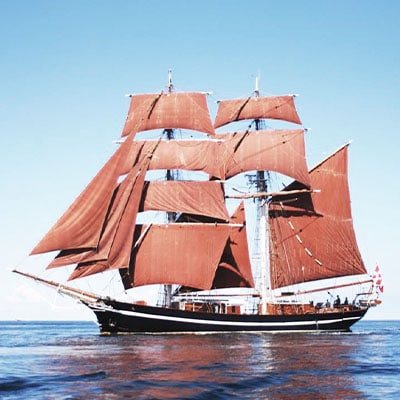 From luxury food and sunbathing on deck to nautical charts and the hoisting of sails, here's what to expect from a journey on this traditional Windjammer. 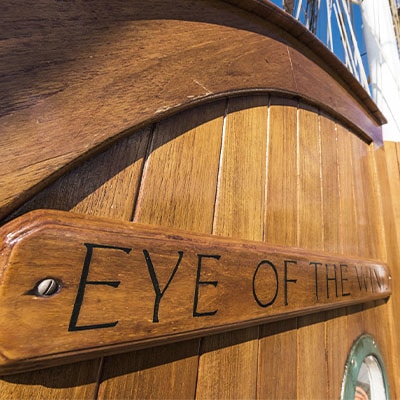 Built in 1911 as a topsail schooner, the Eye of the Wind, built by C Lühring of Brake, West Germany, and was intended to work in the South American hide trade.