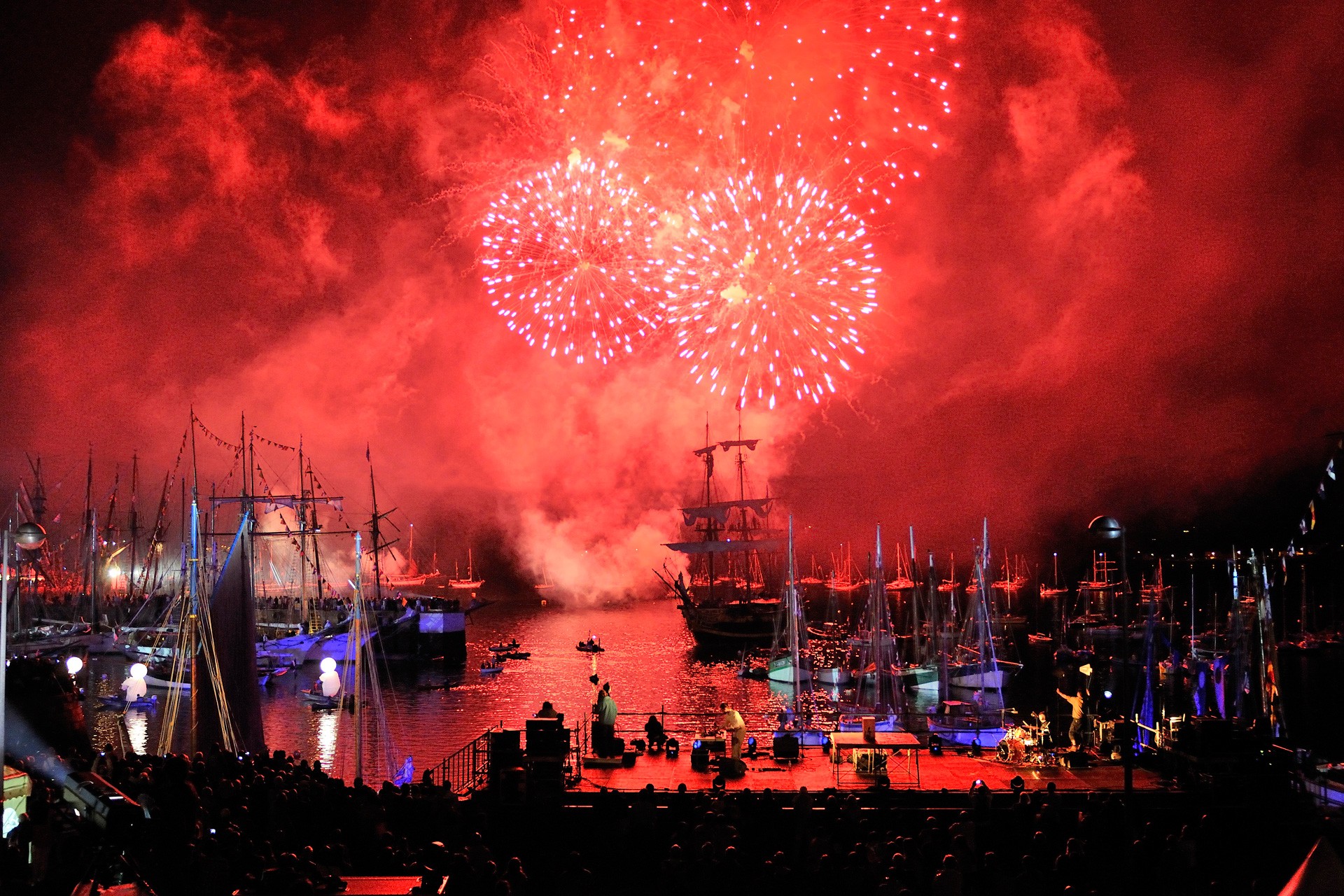 “Welcome on board, tonight we are crossing the channel to France”, now this is sailing! A few moments ago you joined your ship and now the skipper is setting off across the seas. The promise of adventure beckons, skipping across the waves under a moonlit sky to Brittany, and a festival beyond all others, Paimpol folk music and shanty festival. If you’ve a love of music and boats, wooden ones really, then this festival is for you as this is a true celebration of both, as well as the magic of theatre, culture and happiness.

It has been said that the French do public events better than anyone, and this is true here in the charming old town of Paimpol. But you are not the public, you arrive as part of the festival having maybe visited the Channel islands en route, polished the brass and scrubbed the decks in preparation and navigated the English Channel or La Manche. You are now a sailor from another land, someone who is part of something huge and ready for a weekend of world class entertainment for the 30th anniversary of the Paimpol festival.

With 160 bands performing over seven stages, this is an invitation to travel across music of the world. Sea shanties, Breton music and dance, street artists creates the rare fabric of Paimpol, not forgetting expositions, local food producers and some 200 traditional boats creating the perfect backdrop to the event.

Because your ship is the heart of the festival, you are free to come and go as you please, meeting friends, making new ones, stopping for a cider to swap stories or dance the night away until you drop. And the best thing- it’s up to you and your fellow crew how best to enjoy the event. 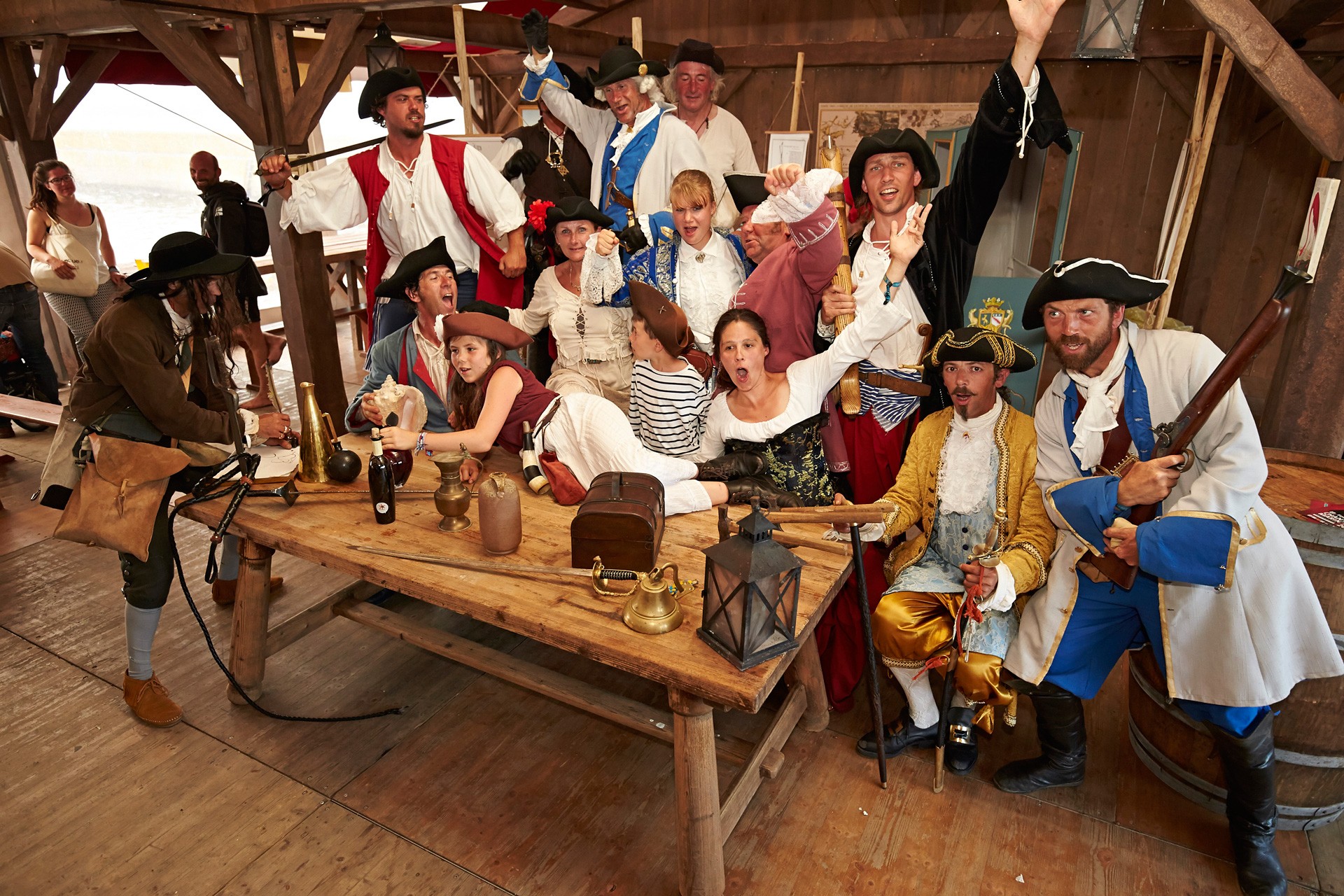 Within the closing hours of the festival, it’s time to get underway again to rest, sail and relax. Take the helm and discover peaceful meandering rivers and medieval towns or remote islands, perhaps cruise in company with other vessels making their way home. With so much to see and do, you will feel like you have discovered the world on your sailing adventure.

Join one of our fleet going to the Paimpol Festival

Blogger and photographer Lizzie Churchill joined Twister and her crew for a week of winter sun sailing in the Canary islands, read on for her full article about her island adventures!

With a fleet of 10 ships covering the seas of the South West, Isles of Scilly, Caribbean, Canaries, Baltic’s,  France and  Faroe’s as well as the Arctic and Atlantic, Venture Sail really do offer an enviable amount of sailing expeditions for anyone interested in testing their sea legs. Having previously sailed and worked with Venture Sail back in August in the Isles of Scilly, I was fortunate enough to be invited back to tick off my second ship in their ever-growing list to begin an adventure of a lifetime. So with 24 hours pirating experience in the bag, it was time to level-up, grab my passport and head off to the Canaries!

Here, I was glad to step into the 25ºc heat and head to Marina San Miguel in Tenerife to meet Twister, her captain and crew and become familiarised with the area and ship.

Sunday; we left San Miguel for our sailing and ended up setting the bar pretty high for the rest of the trip – all within 24 hours!

Having only sailed once before I was excited to see Twister at full sail and encounter the speeds she was so well known for. What’s funny now is that what I’d deemed ‘tippy’ on this particular day was absolutely nothing compared to what we experienced on Wednesday, but we sailed 6 miles off coast and back with water coming in at the sides and a ‘heel’ that kicked our sea-legs into action whilst learning the ropes, and testing our sailing skills. It was then, just as I was discussing how tippy the ship was, Captain Yp suggested I harness up, climb the jib-boom-net and capture the ship ‘in action’ from the very very front. So of course, I did! – much to the concern of Anna below who also shared my concern for how ‘tippy’ our current situation was! It was great fun though and an amazing way to see the ship at full sail! Returning towards Los Cristianos we followed the magic 1,000-meter depth mark notoriously known for spotting whales as they feed and sailed right into a pod of seven Pilot whales! At this point, I could barely believe what was happening having just had a tonne of ‘firsts’ thrown at me before this incredible moment then topped it all off. In hope to then see them a little closer AND capture some shots from the water, 3 of us then hopped into the ships dingy with first mate Julian (or Thor to Anna and I) and did a few laps of Twister to get those hero shots in full sun before all climbing back on board and taking the most refreshing dip in the sea. I mean, could this day seriously get any better? It turned out…YES.

Moored off San Juan we all dried off, changed, then had our first group outing to the nearest bar on the beach, watched the sun go down and sipped on the strongest cocktails known to man, whilst further discussing the day. Back on board after dinner our conversation had turned to the ocean phosphorescence that commonly occurred in these waters; knowing they were present along the Helford in Cornwall, I was aware of the phenomenon but hadn’t actually seen it in person, and so with that I launched myself to the side of the ship only to be greeted with, I kid you not, glowing and flashing specs in the water below! As you can imagine it took all of 2.8 seconds before we’d all returned to swimwear and were diving in, disturbing and further illuminating the phosphorescence around us under the clearest, most star-filled sky I’d ever seen.  The most unforgettable moment. I only wish I could have captured it but alas, it will have to remain a team Twister memory.

Monday – Wednesday we sailed to Valle Gran Rey, La Gomera, and stayed for two nights so that we had a full 24 hours on the Island before sailing further round to Playa Da Santiago for one last night pre Tenerife Crossing. It was another insane few days where the people, places and lifestyle continued to make a mark on me as I realised just how fortunate I was to be sailing in such a beautiful part of the world, surrounded by water and good souls. The rugged, raw and unforgiving landscaped of La Gomera fascinated me along with the lifestyles they had on an Island that felt like nowhere else I’d ever been; Its beauty was incredible — the colours, light, communities and entire environment just so unique and I was so glad to be experiencing it with the people I had surrounding me. People often say it’s like living in a bubble when you feel so cut off and secluded from the Norm, but it was much more than this to me, it was the best form of escapism I wasn’t aware existed.  In a situation where you spend literally the entire waking day in the company of the same, like-minded people, it’s no doubt great relationships will be formed but having only spent two days together these people became like family. The ship became like and as a we continually worked together sharing chores and duties as a community of our own.

I was also surrounded by the sea, constantly. From 8:30am where we sat for breakfast each morning until we rolled into our beds at night, we were outside. ALL day. Fresh air and the sea; a fail-safe recipe for happiness right? My ‘blue mind’ was thoroughly nourished and bursting at the seams.

My curiosity and adventure had also been nourished with a full day to explore the Island of La Gomera. We walked the town, hopped on a bus to The National Park, took in some INCREDIBLE views, lost sight of the horizon as the clouds came in level with us and managed to jump in (get rescued) by our hero blondes to explore San Sebastian after too.

So Wednesday, we went in search for wind in what turned out to be the day of my LIFE and what an experience it was sailing along, up and down some pretty epic swell; I think we’d clocked 11 knots at one point before we  began to heel. It was during this ‘trip’ that Anna and I had decided our state of ‘panic’ whilst sailing would be determined by the actions of our extremely experienced and unflappable crew. It’s hard to worry a little when your sailing experience is rock-bottom, water is rushing in, we’re sat at a comfortable 30-45º and  at 9 knots but when Nicole is sat READING, Julian is out on his chair and Benjamin’s flicking through a magazine on an unsupported bench we couldn’t have been in too much trouble and was certain we were all safe. When Julian put his chair away , coffee mugs are flying, the boat was under water, the waves are devouring the ship and Nicole looks up to take photos and videos I had a feeling this was a little more extreme than we were hoping for. Having heard about their crossing to Tenerife from Amsterdam, I had 100% faith in the crew’s competence so continued to document and laugh in shock as we ploughed on through the infamous accelerated wind zone of the Canaries

With our last full day and the realisation of heading back to ‘civilisation’ hanging heavy over me, I took every opportunity to absorb as much sea-life as possible and went for a post-breakfast dip before we set sail one last time. I wasn’t so sure I was ready for land again. With another 34 mile crossing and some decent wind between the Islands we had some great sailing again that kept the crew on their toes as well as some calm seas that meant Anna and could climb one last time onto the boom-net, keep an eye out for dolphins and generally take in the sights and serenity as we hung above the ocean.

Once again we’d had another beautiful lunch prepared for us by the super talented (and funny) Chef René and if that wasn’t enough, he’d also been baking a farewell cake ANDprepping for the Captains dinner; a beautiful ship-side bbq and spread crafted by past and current Twister Chefs – and it was perfect.

I honestly can’t describe how much fun I had this week, the amount of belly laughing that took place, the humour, jokes, stories and memories made were some pretty special moments and It wouldn’t have been the same had it not been for the team on Twister. It was an escape like no other that I didn’t realise I’d needed so much until I was there living it. Thanks to Jo for inviting me, Yp who made it all happen and ‘got it right’ so very often, Anna for being my roomie, side-kick and all round partner-in-crime, Julian & Marloes for being the best blonde rescue team and crew, Ben & Gawel for your many funny conversations and help and of course to our ship love-birds Nicole and Andreas who taught me so much. So if anyone is looking for a sailing holiday, look no further. I myself will certainly be after another ‘fix’.

Yp, Anna, Julian, Marloes, Rene, Benjamin, Gawel, Andreas, Nicole, Nigel and Jan I can’t thank you all enough for being the best family of shipmates and for well and truly making Twister feel like home for the week.

Read more exciting tales from Lizzie on her blog! – http://lizziechurchill.com/blog/page/1