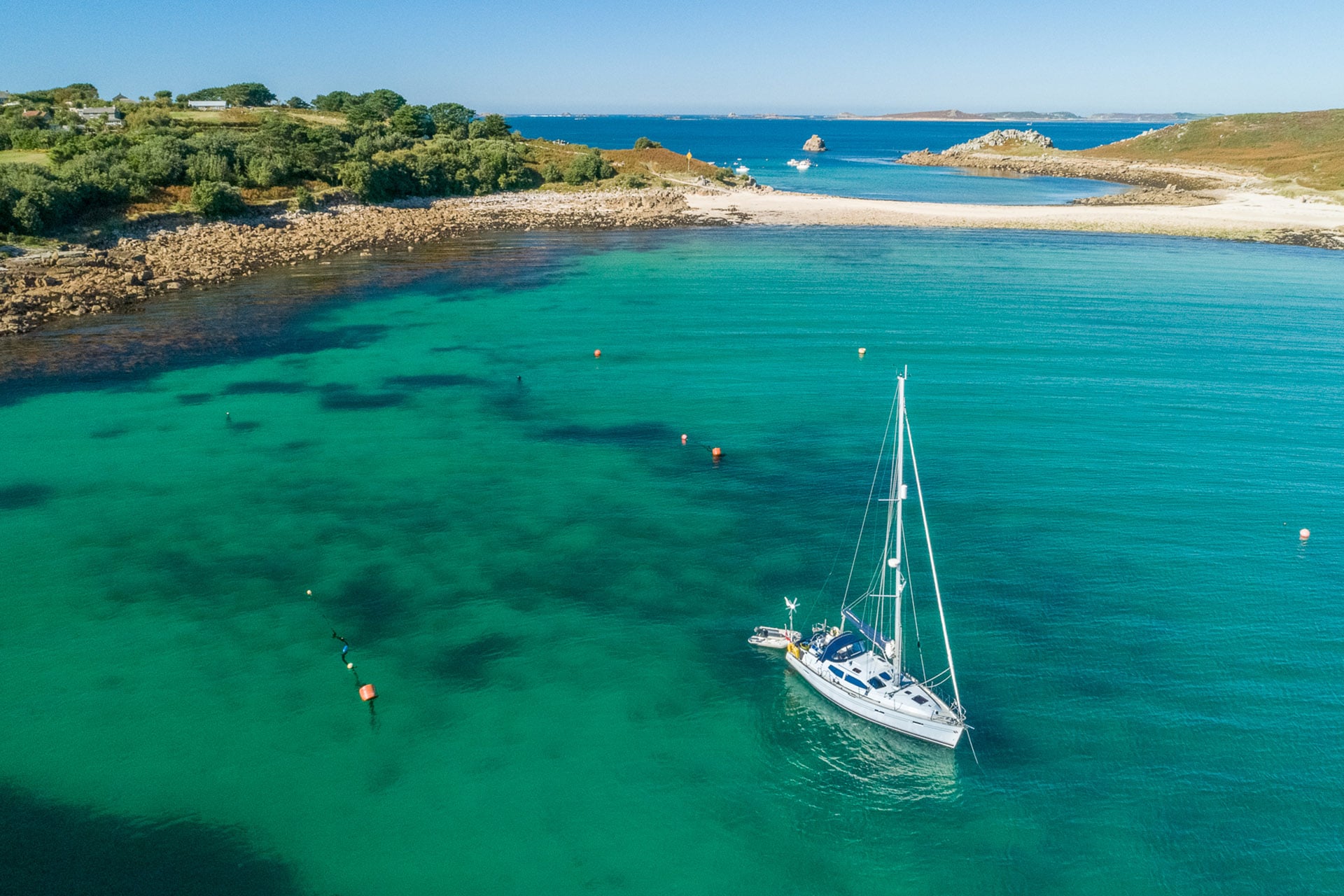 Set 28 miles out into the Atlantic Ocean, the low-lying Isles of Scilly are small, untamed and isolated. Often bathed in warm sunshine, they offer a balmy idyll surrounded by crystal-clear waters.

Comprised of just five inhabited islands, and numerous tiny uninhabited rocks and islets, the archipelago is home to 2,200 islanders, The largest, St. Mary’s is just 2.5 square miles in size and home to the largest population – a total of 1,800 – with the other 400 Scillonians spread across Tresco, St. Martin’s, Bryher and St. Agnes. Each isle has it’s own personality, offering subtle differences from its neighbours. No visit here would be complete without experiencing them all and the best way to explore is with a Scilly sailing holiday.

For those arriving into Scilly by flight or boat, they will have their first glimpse of island life on St. Mary’s.  It may be the largest in the cluster but it’s still very small with a total circumference of just over 9 miles. Head to the ‘capital’ Hugh Town to browse an eclectic cluster of shops, galleries and the museum or soak up the sights from one of the tempting cafes and restaurants that are dotted throughout the town. As you sail into the main harbour, you can see why this island attracts too many sailors each year and with its new marina onshore facilities, the islands welcome boats from far and wide every season.

Lace-up your boots and set off on foot to uncover some of the islands Bronze Age history and the outstanding scenery that has long lured artists and wildlife enthusiasts. Take in the incredible sights from the historic 16th Century Star Castle which commands panoramic views across the archipelago or make for Old Town where you can beach comb whilst losing yourself in the peaceful hush that falls on this quieter side of the island. And if you’ve worked up an appetite after a busy day exploring then you’ll be pleased to know that nowhere is far from a delicious local eatery. – there’s even a vineyard and gin distillery to enjoy!

Home to some of the finest powder-soft white sandy beaches, visitors to St. Martin’s are often forgiven for thinking they’ve landed in the Caribbean. The miles of long white sand, backed by marram-topped dunes are deemed some of the best in Britain, they ebb away into mesmerizingly clear turquoise waters which just cry out to be swum in. It’s the perfect place to pack up a picnic and wander along the coast, exploring, beachcombing and whiling the hours away.

Aside from the beach St. Martin’s offers a natural paradise, a spectacular landscape of wild flowers, heather and gorse.  The birdlife here is exceptional with guillemots, Storm Petrels and puffins all calling the Eastern isles (which are scattered off the far tip of St. Martin’s) home. Stick around until after dark and you will be rewarded with a sky full of stars – the island boasts five dark sky sites and even a community observatory.

Fondly referred to as the wild isle, St. Agnes is Britains most southwesterly outpost and is strewn with Bronze Age burial sites and barren heathland. Spirited, independent and windswept, St. Agnes offers a rugged beauty interspersed with stunning sheltered coves. The only island to be separated from the archipelago by a deep-water channel, St. Agnes is connected to the diminutive island of Gugh by a shallow sand bar that is only accessible at low tide. Stroll barefoot across to spend a few hours utterly castaway during the flooding high tide. Gugh is one of the most popular anchorages on Scilly, where you can spend the evening on deck with the most amazing sunsets and starry skies for company.

It is in part this isolation that has seen the island become a magnet for wildlife and it is here that Storm petrels and Manx shearwaters have started to breed again thanks to the highly successful Seabird Recovery Project. For those who prefer more modern comforts, fear not, St. Agnes is also home to galleries, musicians and artists’ workshops as well as the most south-westerly dairy farm in Britain which produces absolutely phenomenal ice cream!

Manicured and sophisticated, Tresco is the only privately owned island in the chain and its luxurious appeal lures celebrities and royalty alike. Proffering fabulous beaches – both Pentle Bay and Appletree Bay jostle for attention amongst the world’s best beaches – it is the ideal place to linger and take in the sense of calm which Tresco exudes.

However, it is the incredible sub-tropical Tresco Abbey Garden for which the island is arguably best known. A botanical wonder set amidst the ruins of an ancient Benedictine priory, the gardens are home to over 20,000 plant species collected from around the globe, many of which would be unable to survive anywhere else in the UK. Whilst exploring, keep eyes out for the flash of a red squirrel – they have thrived since being introduced in 2013 and are often spotted hopping from tree to tree! Wildlife watchers will also rejoice in watching the seals and array of migratory birds that flock to Great Pool whilst history lovers can spend hours visiting the numerous heritage sites found on Tresco, including Cromwell’s Castle which guards the channel between Tresco and Bryher. And there’s no need to pack a lunch, hungry tummies can be satiated at one of the mouth-watering eateries, each serving up delicious island shellfish and local produce.

Beautiful Bryher, an island of rugged cliffs and secluded coves, of wonderful contrast and overflowing with charm. Just one and a half miles in length by half a mile wide, this tiny isle packs a punch with countless artists and creative spirits inspired by its magical charms including author Michael Morpurgo. Indeed, Bryher is the location for the film When the Whales Came, filmed on the island back in 1988.

However, you do not need to be a creative type to be captivated by Bryher’s allure. Experience the stillness of the southern shores with their shell-strewn beaches and rich aquamarine waters. Venture up the granite stacks of Shipman Head to storm watch and embrace the wilder side of Bryher or circumnavigate the coastline via the seven hills, none of which rise more than 150 feet.

The island is also home to an abundance of tempting island produce. Indulge in heavenly freshly-prepared paella, cook up some Bryher bangers and farm produce on a barbecue, or treat yourself to some delicious Veronica Farm fudge and Crab Shack delights – yum!

Discover the Isles of Scilly with one of our sailing holidays >

You can choose to sail over to the Isles of Scilly from Cornwall or Devon, with voyages departing from Falmouth, Penzance Plymouth or Brixham. The trip over the 28 miles to the islands can take a full day of sailing, depending on the winds, but once you are over there you have the freedom to tour via boat with opportunities to step ashore each day and explore the islands on foot. If you’re not keen to sail over to the Isles of Scilly then you can charter the Scillionian classic boat Pettifox who spends her summers on St Mary’s where she will meet guests off the planes and ferry to host them on board for a week or a weekend. Sail the islands and stop off each day to explore and enjoy the local food or cook out on the beach with a BBQ and watch the sun go down. A sailing holiday on the Isles of Scilly is a truly magical experience unlike any other sailing adventure in the UK.