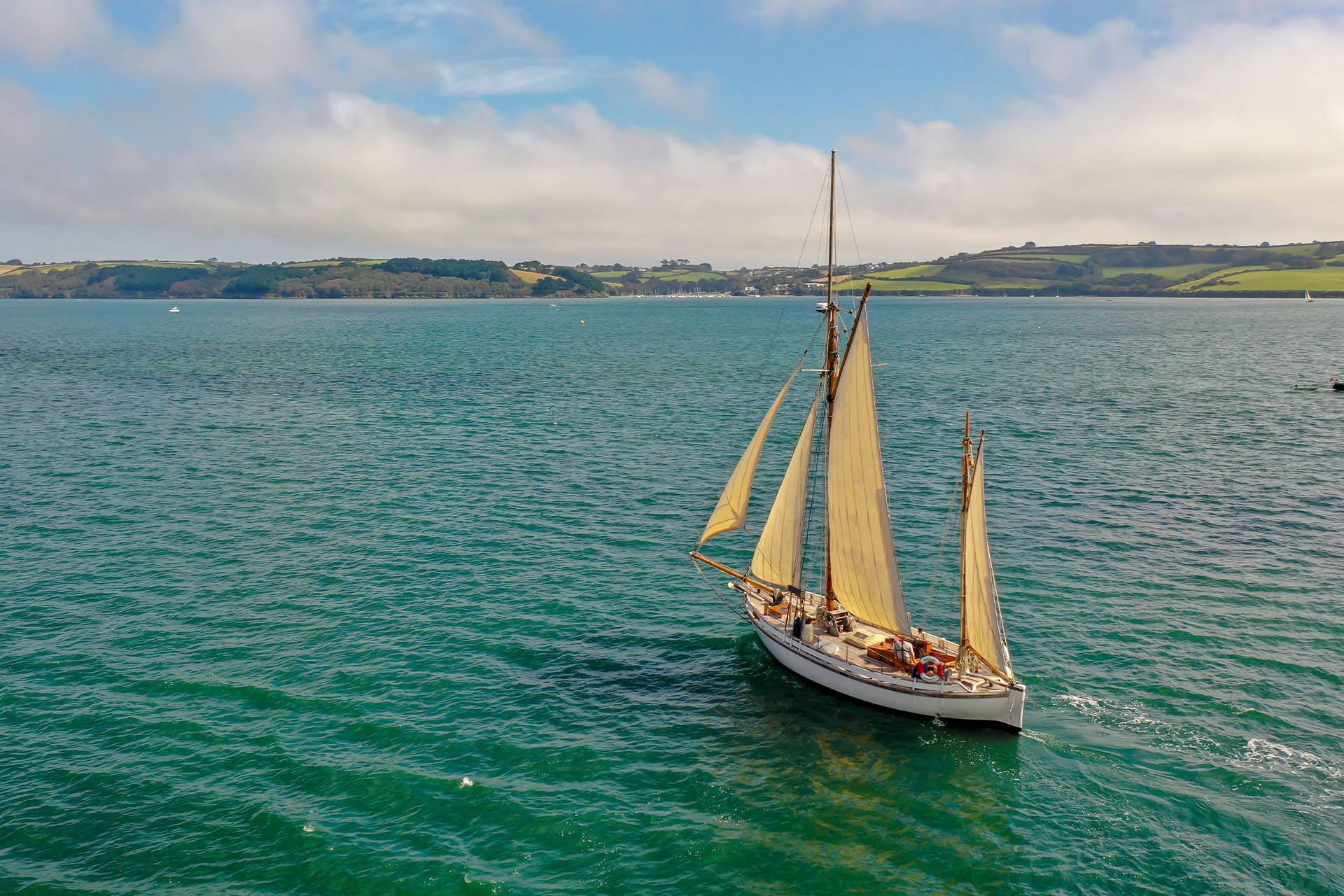 Having never sailed before I was expectant of my first sailing experience but not really sure what for! A fully crewed Devon sailing holiday seemed the perfect start to my non-existent experience.

The full English breakfast from the Sloping deck in Dartmouth, had done little to settle the nervous energy in my stomach. We were standing on the edge of the harbour wall in Devon when we first caught sight of what would become our floating home for the next three nights; Escape, a stunning Norwegian classic wooden yacht.

With everyone and their luggage safely aboard, introductions were made and safety briefings given. The plan, according to the Skipper Andy, was to sail southwest, stop off in Salcombe to explore and continue onto Yealm before heading back to Dartmouth. Once the bunks had been settled and everyone had familiarised themselves with the boat and her rigging, we were off.

Fortunately, we were blessed with one of the best weekends of sunshine this year so shorts, t-shirts and plenty of sun cream were the order of the day.

We had soon rounded Dartmouth castle, clear of the mouth of the River Dart and were now out in the ocean making for Salcombe, my nervous energy and the harbour left behind us. Not knowing how I would fair at sea, and not knowing the least about ropes, sails and charts was something I needn’t have concerned myself with. Andy was our laid-back guide on this fully chartered boat and with his help, I was soon hoisting sails and ‘making off’ ropes.

We gently bobbed toward Salcombe taking in the views of Devon from the sea. As the water ebbed away, so did the time, with the phrase ‘lost’ at sea beginning to take on a new meaning. Over the next few days, this feeling became more profound and the checking of digital gadgets gave way to the intriguing sights provided by the binoculars; wildlife, mesmerising scenery, and the other ‘sailors’ travelling through the lenses.

Tacking and jibing up and down the Devon coastline for the first time was equally as fun as it was enlightening. When we had used up all of the available wind, sails were dropped, ropes were tidied and we entered into Salcombe town via the mouth of the Kingsbridge estuary.

Salcombe was incredibly picturesque, with a relaxed and carefree spirit reminiscent of being back home in certain towns of Cornwall. Only to be reminded of the difference when the cream teas were brought up on deck and the debate over cream or jam first ensued!

Anchoring at dusk in the tranquillity of Yealm we were welcomed by the clearest of skies to observe the stars. Being woken by the gentle lull of the hull in the morning, I was now familiar with the smell of warm pastries and coffee simmering throughout the saloon and climbing above deck to appreciate our totally unspoiled surroundings, has to be the best way to wake up!

The final stretch of our day sail back up the coast allowed us more time to relax, sample more cooked on-board delicacies (including full English breakfast), and for me to learn some more about sailing aboard this Classic yacht. Andy happily fielded all of my questions and took the time to show me some basic chart reading and navigation.

It was during this stretch back up the coast we were joined by an inquisitive pod of Dolphins playfully ducking and diving under the bow of the boat. With the final highlight for me, helming the boat back into Dartmouth harbour affording me the opportunity to revel in the pride of piloting such a vessel. Something I had never expected to do on my first sailing holiday in Devon.

After a night in Dartmouth, the usual selection of pastries, cereals, yoghurts and fruit followed in the morning and with heavy hearts, we packed our bags and made our way above deck to say our final goodbyes.

Setting foot back on dry land and searching for what day and time it was confirmed we had in fact only been aboard for three nights. It certainly felt longer; confirming my suspicions that she isn’t just Escape by name, but also by nature. 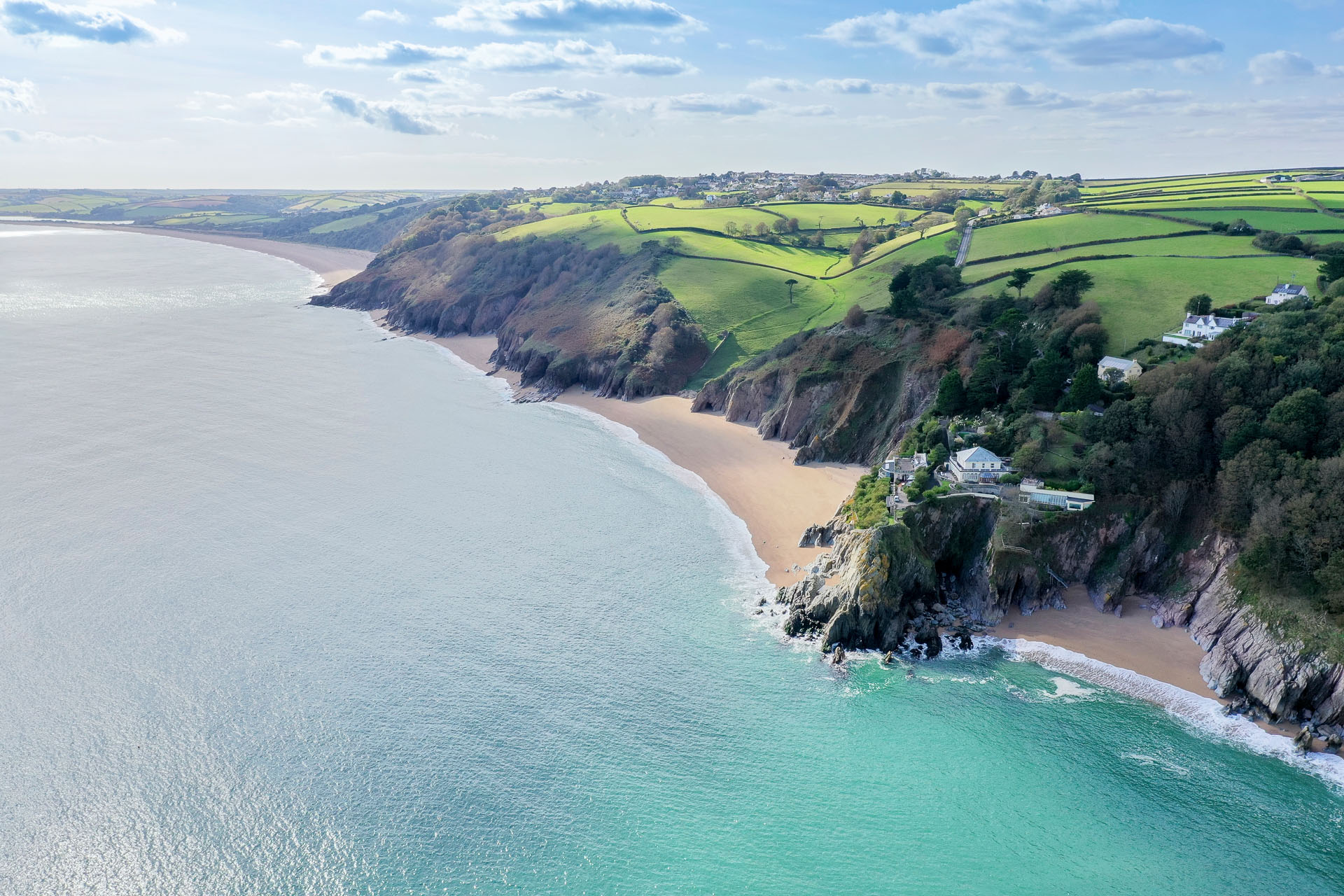 Nikki Alford, skipper of Bessie Ellen and co-owner of Venturesail gives her insight into her favourite sailing grounds around the beautiful South Devon Coast.

If there is one goal for 2020 it should be getting out on the water for a long weekend right here at home in the UK. Even if you have never sailed or stepped foot on a boat, there is just so much to explore along our shores and rivers that will delight and inspire you no matter what the weather. And the best thing is – you don’t even have to know how to sail.

I’m going to take you on a tour of the South Devon coast, exploring secret coves, bustling harbours and quiet estuaries on board our fleet of Devon-based traditional craft. Along with their welcoming and knowledgable, the captains and crew are there to give you the very best of times, both onboard and whilst exploring the shore and feeding you wonderful food!

Protected on both shores by two dominating castles is the historic merchant port of Dartmouth is by far the most picturesque in the whole of Devon. The old town overlooks the Rover Dart, tumbling picturesque timber-framed houses line narrow cobbled street housing delightful; independent shops and galleries. The wide River Dart winds through rural Devon farms and woodland before arriving at the very hip town of Totnes. If you are joining Escape or Our Daddy in Dartmouth, it is well worth starting in Totnes (better parking and train links) and taking the River Ferry down the River Dart. Both boats run coastal exploration weekends and day sails from Dartmouth so it is worth taking time to wander the streets to discover some 600 years of history.

I prefer to anchor than berth overnight in the harbour. It’s a real chance to “get away from it all” and Devon has two of my favourite beaches to drop anchor. The long sweep of the golden beach at Blackpool Sands is a perfect backdrop to watch the sunset with the boat murmuring at her anchor. Further up the coast to the South of Berry Head is St Mary’s Bay and no doubt a favourite of our third Devon-based boat, traditional trawler Pilgrim of Brixham. With clear waters of crystal blue, St Mary’s is a marvellous spot to dive over the side and explore ashore.

As always the British summer is never always sunshine and sparkling seas, but what we do have are sheltered secret places away from rougher seas. Our Devon harbours, rivers and creeks just scream “Explore me”, with each bend opening to another seemingly new world to discover. Old oaks bow down to the river’s edge, Herons like statues stare in dark water while families of ducks and swans cruise in the tranquillity of river life. Even as a beginner to boats, it’s a wonderful feeling to take the tiller, gently potter along under sail and enjoy the calm and quiet.

Of course with all this activity and fresh air, food is an absolute high point and what better county in England produces such fine fare. Sharpham, up the River Dart, produces some outstanding cheeses of course best washed down with local apple juice or ciders from nearby villages. Stoke Gabriel is surrounded by organic orchards and of course, must absolutely finish with a Devon Cream Tea.

Whichever boat you choose, whether sailing up the River or out to sea, this coast really is perfect for those wanting to try something new or simply see Devon from a different view.